River Redgum The iconic River Redgum, Eucalyptus camaldulensis, Karra in the Kaurna language, has been one of my favourite trees for many years. I have used its timber in my work, I’ve encountered it in landscapes in many parts of Australia and I’ve seen its familiar form in northern Africa and southern Europe, quite a comforting surprise. I’ve estimated ages up to 400 years, they can live for up to a 1000 years, but until L50K I had never planted one. Now I have planted over one hundred. As at December 2018 the biggest is about 3 metres. It is said one plants trees for the next generations but I get satisfaction as well.
I understand River Redgums can sequester about 11 tonnes of carbon dioxide equivalents per hectare per year and forests can store over 210 tonnes of carbon per hectare. The timber weighs about 1150kg c.m. when green, therefore it sinks in a river, when dry it weighs about 900 kg c.m. and therefore floats. Firewood sells at about $375 tonne, furniture and feature grade timber can sell between $3500 to $6000 c.m. What a timber!
And there is a curious story as to how it received its botanical name. It was named by the German botanist/gardener Frederick Dehnhardt from a specimen growing in the garden of the Count of Camaldoli, Francisco Ricciardi, in the hills above Naples, Italy in the 1820’s, well before South Australia was even colonised. The seed is thought to have been collected on one of the early French voyages of discovery to Australia, that of Antoine d’Entrecasteaux or even Nicholas Baudin who sailed the Fleurieu coast in 1802. The seed then somehow found its way to Italy!
Gavin, Dec. 2018 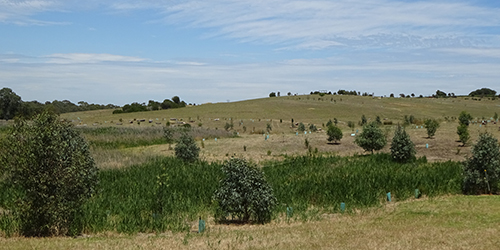 Native Pine Another favourite tree is Native Pine (also Southern Cypress Pine) Callitris gracilis, Narno in the Kaurna language. There are fourteen Callitris species in Australia with common or commercial names such as White Cypress and Cypress Gold.
Again I have used its timber in my work (and the Sandhill Shelter and Shelter Shed here). Once common in the Adelaide region, including a couple of forests in the now metropolitan area, it has all but disappeared leaving just a few remnant stands here and there including the Aldinga Scrub. It is being reintroduced to L50K with 25 seedlings planted in 2015 and hundreds more since.
Native Pine is a durable construction and fencing timber, used for ‘pug and pine’ dwellings, it is white-ant and wood rot resistant, and a great slow burning cooking and heating fuel, hence its demise in settled areas. Hundreds of trunks could be used for a dwelling, close to a thousand for a large structure.
The timber I use comes from managed forests in Queensland and NSW. It is common in the Flinders Ranges and the Murray Mallee but not in commercial quantities, or rightly, is in our national parks system.
Gavin, Dec. 2018